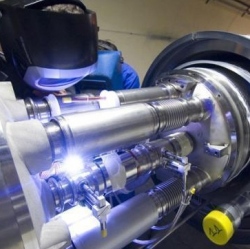 New high-precision tests carried out by the OPERA collaboration in Italy broadly confirm its claim, made in September, to have detected neutrinos travelling at faster than the speed of light. The collaboration today submitted its results to a journal, but some members continue to insist that further checks are needed before the result can be considered sound.

OPERA (Oscillation Project with Emulsion-Tracking Apparatus) measures the properties of neutrinos that are sent through the Earth from the CERN particle physics laboratory in Geneva, Switzerland, and arrive in its detector located under the Gran Sasso mountain in central Italy. On 22 September, the collaboration reported in a paper on the arXiv preprint server that it had measured neutrinos arriving some 60 nanoseconds earlier than they would have if travelling at light speed. The researchers obtained that result by statistically comparing the temporal distribution of protons within the 10.5 microsecond pulses that produce the neutrinos at CERN with that of the neutrinos observed in its detector.

The new tests, completed 6 November, did away with the statistical analysis by splitting each pulse into bunches just 1- to 2-nanoseconds long, allowing each neutrino detected at Gran Sasso to be tied to a particular bunch produced at CERN. These tests were carried out over 10 days and provided 20 events. The researchers confirmed that the neutrinos arrived 60 nanoseconds early, with an uncertainty of about 10 nanoseconds, comparable to that of the initial result.