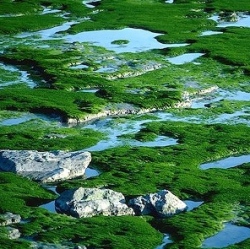 The whole thing is called Offshore Membrane Enclosures for Growing Algae or more concisely, OMEGA, and will be demonstrated to reporters at one of San Francisco’s public utilities water pollution control plants tomorrow and is the culmination of $10 million worth of research.

The idea is more practical than revolutionary says Trent, who has spoken to reporters already about the project. The idea was to figure out a way to create an algae farm that could be placed close to a waste treatment facility, without taking up a bunch of land. That’s when he came up with idea of using plastic bags floating in the ocean. Conventional systems use large pools of water set up on dry land. In the test facility, each bag is four meters long and has been seeded with wastewater and carbon dioxide. Sunlight makes its way through the clear plastic as the bags float on seawater, which not only serves as a place for the bags to reside, but also help keep the algae cool, which must be done mechanically in other facilities. The algae eat the wastewater and grow until the bag is filled, at which point it is removed to be used for making biofuel.

Reports thus far show that algae farms set up in this manner would be capable of producing over two and a half million gallons of fuel annually in an area just under two square miles.

Wastewater with oil-producing algae circulate through photobioreactors (green tubes) floating in a seawater tank at the San Francisco Southeast Wastewater Treatment Plant, where NASA has set up one of its OMEGA research facilities.

Trent says with a real farm, the carbon dioxide come could from nearby power plants, helping to reduce the carbon footprint of the whole process. Not helping, on the other hand, is that the whole scheme is based on petroleum based plastic bags, which in addition to their inherent carbon footprint would also have to be disposed of once a year as they degrade in saltwater. Trent suggests that California farmer’s could use them as field cover instead of the large tarps they currently use. He also says that if one or more of the bags should break, like say in a storm, there is no worry as the algae would die in the seawater and the wastewater released would be the same as wastewater facilities such as those in San Francisco already pump into the bay.

At this point it seems clear that a new type of plastic will need to be developed for the project to become viable, especially if it is to be ported to space exploration applications at some point; perhaps one made from biodegradable material so that it could be grown along the way, and then could be used as fertilizer afterwards.