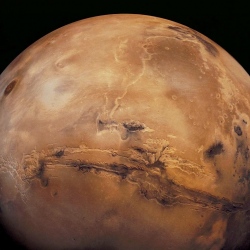 This is not the path to go to maximize riches,” Elon Musk told me when I asked him about the business of space travel. “It’s a terrible risk adjusted return. But it’s gotta happen. I think that for me and a lot of people, America is a nation of explorers. I’d like to see that we’re expanding the frontier and moving things forward. Space is the final frontier and we have to make progress.”

It’s exciting and nerve wracking,” Musk said about the upcoming launch. “There’s a lot of shit that can go wrong.”

By that he means the path of the Dragon capsule itself. This will be a robotic voyage – the flight isn’t manned. Once it gets into Earth’s orbit, the Dragon will first do a wide loop around the station. It will then verify that the approach systems can acquire and lock on to the space station and can communicate effectively. After that loop, it will go in for the final dock. If all goes well, Dragon will be berthed at the International Space Station on May 4.

“It’s very complicated,” said Musk. “Because it’s all done with onboard intelligence – there’s no remote control. There are lots of things that have to be verified before docking can be attempted. We don’t want to take any chance that it can damage the station.”

If all goes well, though, this will be the first of many flights for Dragon to the space station.  After a series of unmanned flights, Musk expects that the first manned flight should head towards the ISS within 3 years. Musk himself expects to make the trip himself eventually, but he won’t be on that first flight.

“Every time I suggest being on the first one, everyone at SpaceX panics,” Musk laughs.

Eventually, though, Musk has much bigger goals. He intends to go to Mars. When I asked him if he was g0ing to stop off at the Moon first, he told me that it’s not a priority. “I’m okay with going to the moon, but we’ve seen that movie before and remakes are never as good. It would be more significant to have a base on the Moon, rather than just going back.”

Going to Mars isn’t a lark for Musk, either. He’s personally invested in space travel. He’s not just the CEO of SpaceX, he’s its Chief Designer, and he’s heavily involved in the day to day activities of the company – splitting his time “about 50/50″ between this company and electric vehicle company Tesla Motors.

That personal investment reaches back to when he was a child. “From when I was a kid, I liked sci-fi books and movies. Since then, I’ve been thinking about what things will most effect the future of humanity and civilization. The future’s going to be really different if we’re a spacefaring civilization or not. To me, the idea of being forever confined to Earth is a terrible, sad future. In the future, we should be exploring the stars.”