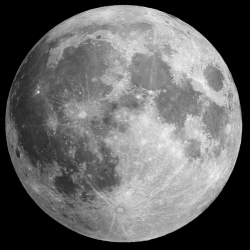 The 2,500km-wide structure is believed to be the remains of old rift valleys that later became filled with lava. Centred on the Moon’s Procellarum region, the feature is really only evident in gravity maps acquired by Nasa’s Grail mission in 2012. But knowing now of its existence, it is possible to trace the giant rectangle’s subtle outline even in ordinary photos.

Mare Frigoris, for example, a long-recognised dark stripe on the lunar surface, is evidently an edge to the ancient rift system. "It’s really amazing how big this feature is," says Prof Jeffery Andrews-Hanna. "It covers about 17% of the surface of the Moon. And if you think about that in terms relative to the size of the Earth, it covers an area equivalent to North America, Europe and Asia combined," the Colorado School of Mines scientist told BBC News.

"When we first saw it in the Grail data, we were struck by how big it was, how clear it was, but also by how unexpected it was. "No-one ever thought you’d see a square or a rectangle on this scale on any planet."