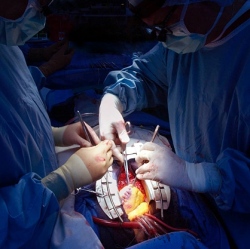 Using a patient’s own cells would help to overcome some of the problems associated with receiving a donated heart, including immune rejection, as well as the long-term side effects of life-long treatment with the immunosuppressive drugs. To achieve this, the research team had to overcome three major technical challenges:

1. Create a structural scaffold from a human heart

One challenge is producing a structural scaffold able to support new functioning heart cells. To do this, the researchers take a human heart and remove the heart muscle and other cells and components that would stimulate the recipient’s immune system to reject the organ. Once stripped, the structural and connective tissues that give the heart its 3D structure are left behind.

If researchers can re-seed this structural scaffold with viable heart-like cells from the patient who will receive the heart (steps 2 and 3 below), the engineered heart would have the potential to reduce the risk of rejection and the resulting need for long-term immunosuppressive treatment.

Team leader Harald Ott, MD, an assistant professor of surgery at Harvard Medical School, has pioneered a method for stripping the living cells from donor organs and then re-populating the remaining scaffold with new cells.*

2. Grow cells that will function and contract like heart cells

Another challenge is developing a method that will enable researchers to use cells from the potential heart recipient to produce cells that will function like heart cells. These are generated from induced pluripotent stem cells (iPSCs), cells with the potential to be turned into many different types of cells.

The team generated the heart-like muscle cells from reprogrammed skin cells. Once they had checked the quality of these cells, they grew them in the laboratory for several days and showed that the cells developed into tissue that spontaneously contracted like heart cells.**

3. Re-seed the human heart scaffold and grow it in an automated bioreactor

The final challenge was developing an automated bioreactor system capable of supporting a whole human heart while the re-seeded heart cells take hold. In this initial study, the researchers only partially re-seeded the scaffold, many more cells would be needed to totally re-populate a functioning heart scaffold.

After incubating the engineered heart in the bioreactor, the researchers showed that the regenerated tissue behaved like immature cardiac muscle tissue that was able to contract in response to electrical stimulation.

“Regenerating a whole heart is most certainly a long-term goal that is several years away,” says Guyette. “Among the next steps that we are pursuing are improving methods to generate even more cardiac cells.”

He says re-seeding a whole heart would take tens of billions of cells, so the team needs to optimize the bioreactor techniques to improve the maturation and function of engineered cardiac tissue.

They also need to integrate the electrical function of the regenerated tissue in the bioengineered heart. In the meantime, Guyette says the team is working on engineering a functional myocardial patch that could be used to replace tissue damaged after a heart attack or heart failure.