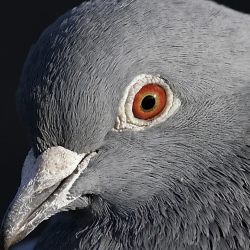 The question of how birds navigate using – among other signals – magnetic fields is the subject of much debate.

These new "GPS neurons" seem to show how magnetic information is represented in birds’ brains.

However, the study reported by Science leaves open the question of how they actually sense the magnetic field.

David Dickman of the Baylor College of Medicine in the US set up an experiment in which pigeons were held in place, while the magnetic field around them was varied in its strength and direction.

Prof Dickman and his colleague Le-Qing Wu believed that the 53 neurons were candidates for sensors, so they measured the electrical signals from each one as the field was changed.


Baylor College of Medicine
Every neuron had its own characteristic response to the magnetic field, with each giving a sort of 3-D compass reading along the familiar north-south directions as well as pointing directly upward or downward.

In life, this could help the bird determine not only its heading just as a compass does, but would also reveal its approximate position.

Each cell also showed a sensitivity to field strength, with the maximum sensitivity corresponding to the strength of the Earth’s natural field.

And just like a compass, the neurons had opposite responses to different field "polarity" – the magnetic north and south of a field, which surprised the researchers most of all.

"People had reported in the past, in a 1972 paper in Science, establishing that birds do not seem to respond to the polarity of the magnetic field, yet here we have neurons that are in fact doing that," Prof Dickman told BBC News.

"That’s one of the beautiful aspects of what we’ve identified, because it shows how single brain cells can record multiple properties or complex qualities in a simple way."

Several hypotheses hold that birds’ magnetic navigation arises in cells that contain tiny chunks of metal in their noses or beaks, or possibly in an inner ear organ.

However, the most widely held among them was thrown into question recently when researchers found that purported compass cells in pigeon beaks were in fact a type of white blood cell.

Another theory suggests that a magnetic sense may come about in receptors in birds’ eyes. When exposed to light, the theory says, molecules called cryptochromes undergo a fleeting change in their atomic makeup whose length depends on their alignment with a field.

Pigeons have been shown to follow roads, but the real mystery is in their internal compass

The new work throws this latter possibility into question, as it would work equally well with a north- or south-pointing field.

Asked what an outsider should think, given that the recent results conflict with the two most plausible explanations for birds’ remarkable navigation abilities, Prof Dickman said "be puzzled, because I am".

"We’re leaning toward a third receptor in the inner ear, and we’re doing experiments to try to determine whether it is in fact a receptor or not."

Henrik Mouritsen of the University of Oldenburg in Germany regards the current results with caution.