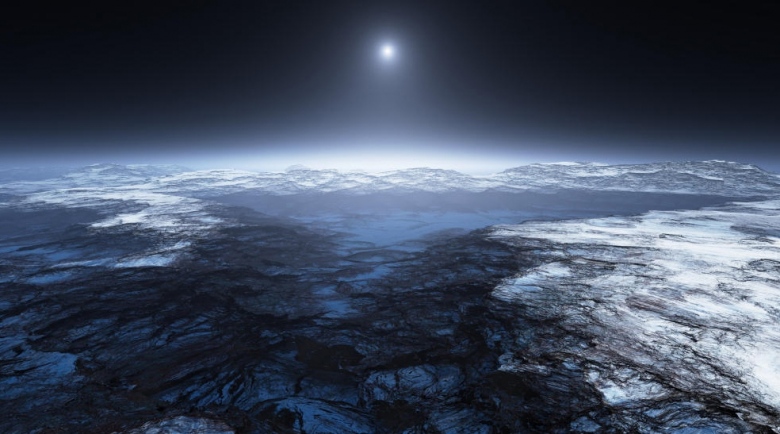 Scientists have found the best evidence yet for water just beneath the surface of Jupiter’s icy moon, Europa.

Analysis of the moon’s surface suggests plumes of warmer water well up beneath its icy shell, melting and fracturing the outer layers.

The results, published in the journal Nature, predict that small lakes exist only 3km below the crust.

Any liquid water could represent a potential habitat for life.

From models of magnetic forces, and images of its surface, scientists have long suspected that a giant ocean, roughly 160km (100 miles) deep, lies somewhere between 10-30km beneath the ice crust.

Many astrobiologists have dreamed of following in the footsteps of Arthur C Clarke’s fictional character David Bowman, who, in the novel Odyssey Two, discovers aquatic life-forms in the deep Europan sea.

The discovery of shallow liquid water by an American team makes a space mission to recover water from the moon much more plausible.

The icy eddies could transfer nutrients between the surface water and the ocean’s depths.

"That could make Europa and its ocean more habitable," said lead author Britney Schmidt from the University of Texas at Austin, US, who analysed images collect by the Galileo spacecraft launched in 1989.

Glaciologists have been studying the surface of Europa for many years, trying to work out what formed its scarred, fractured surface.

By looking at Antarctica, where we see similar [features] – glaciers, ice shelves – we can infer something about the processes that are happening on Europa, said glaciologist Martin Siegert from the University of Edinburgh.

He explained that the new study tells us how upwelling of warmer water causes melting of surface ice, forming cracks.

"You get freezing [water] between the cracks… so you end up with the existing ice cemented in with new ice."

The US and Europe are working on missions to Europa, and Jupiter’s other moons, which they hope to launch either late this decade or early in the 2020s.