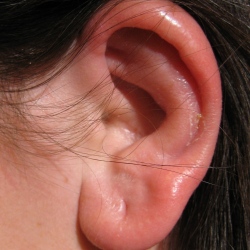 That’s Sean Wingrove-Smith from Walderslade, who doctors gave a new ear thanks to a procedure that sounds like a verse out of Genesis.

The procedure involves grafting cartilage from his ribcage and carving it into the shape of an ear. It’s not as fleshy as an actual ear, but it’s saved him from the taunts of prickish little schoolkids and allows him wear glasses.

Sean can’t actually hear out of his new ear, but just having it there has improved his confidence, according to his parents. He suffers from Goldenhar Syndrome, which can keep babies’ ears, lips, mouth, or nose from developing properly. It can also cause scoliosis or hearing loss.

Sean isn’t the first to receive this procedure, but it’s the kind of thing that reminds you how otherworldly our technology can really be, performing what would have been miracles not long ago.