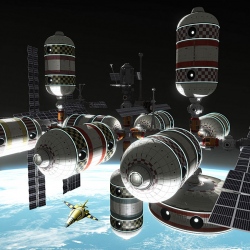 SpaceX is busy gearing up for a date with the International Space Station, but the company now has a second invite to one that doesn’t exist yet. SpaceX has announced that it will help fellow private spaceflight firm Bigelow carry its inflatable modules into orbit, with the goal of connecting a bunch to form a proper station.

SpaceX isn’t quite spaceworthy yet, but wants to be by 2015 if all the tests it needs to complete between now and then go as planned. The lynchpin is the company’s seven-person Dragon capsule, which has so far cleared seven of the 10 checks NASA requires before the agency deems the craft as safe for ferrying human cargo. The Dragon capsule will launch atop SpaceX’s Falcon 9 rocket, and the vehicle is one of the options on the table NASA is considering to further its manned space ambitions in sub-orbit.

That cargohold could also include inflatable habitats by Bigelow Aerospace, as both Bigelow and SpaceX just inked a new deal to see it happen. Sometime after SpaceX is ready to rumble, Bigelow will go through the company to launch its BA 330 modules, the latest orbital habitat Bigelow has developed and one that offers 330 square meters of space in an environment that’s safer than the International Space Station, according to the firm. While it was once thought that Bigelow would immediately turn these into space hotels for rich thrill seekers, the 330s would instead be joined to form commercial space, one that countries without an advanced program can use for orbital experiments.

Of course, before any of that happens, SpaceX has a date with destiny — and the ISS. Right now that rendezvous is scheduled for May 19, though there have been several delays and could be more.