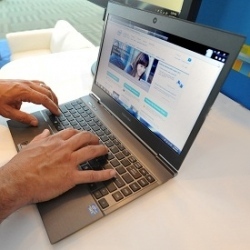 Codenamed Corona, this laser-powered contraption would handle ten trillion floating points operations a second. In other words, if you put just five of them together, you’d approach the speed of today’s supercomputers. The chip’s 256 cores would communicate with each other at an astonishing 20 terabytes per second, and they’d talk to memory at 10 terabytes a second. That means it would run memory-intensive applications about two to six times faster than an equivalent chip made with good old fashioned electric wires.

More importantly, Corona would use a lot less power, helping the world’s supercomputers break the vaunted exascale barrier — i.e. deliver a machine that can handle one quintillion (10 to the 18th) floating point operations a second. That’s 100 times faster than today’s fastest supercomputer. “Electronics…cannot scale to the scale that we need for these large systems,” says HP Labs researcher Marco Fiorentino.

This sort of optical chip communication is known as “integrated photonics.” Telecommunications networks and high-speed computer interconnects already use light to send information faster and more efficiently — think “fiber optics” — and now, HP and other research outfits are pushing to use light for communicating between computer computer chips or even between components built into the chips themselves.

Corona is just one of several efforts to build superfast chips that can bust through the exascale barrier, including Intel’s Runnemede, MIT’s Angstrom, NVIDIA’s Echelon,and Sandia’s X-calibur projects. All seek to use integrated photonics in some way, but the technology is the heart of the matter for HP’s 256-core Corona.

The catch is some of the technology needed to build Corona doesn’t exist. But that’s changing. Recently, researchers and chip makers have shrunk optical communications devices so that they can be put onto chips. They’ve made chip-scale equivalents of cables, modulators, and detectors. “A lot of people have concentrated on individual devices,” said HP’s Fiorentino. “Now they’re starting to build circuits. It’s like going from the transistor to the integrated circuit.”

There are two roadblocks preventing us from continuing to scale up the performance of today’s chips at the current rate. The more processor cores we cram on each chip, the more challenging it is to coordinate them. And as computer systems get bigger, moving data in and out of memory becomes a huge energy drain. Integrated photonics can help with both problems by providing high speed, low-power communications.

When you get beyond 16 cores per chip, it becomes very difficult for the chip to function as a parallel processor without the cores being able to communicate with each other, says Lionel Kimerling, a materials science and engineering professor at MIT. “There’s going to be no way to scale performance without some sort of broadcast or near-broadcast capability,” he says.