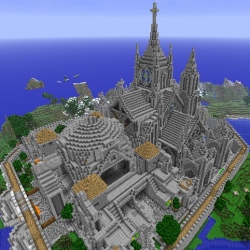 BitQuest is a new public Minecraft server from Chilean game developer Mego. The idea behind BitQuest is to create a working virtual economy where players can earn bitcoins, the popular digital cryptocurrency, by trading Minecraft’s emerald element. Each emerald is worth 1 bit (1/1 millionth of a bitcoin), or about .04 cents.

In the BitQuest version of Minecraft, you can deposit the emeralds in exchange for bits using enchanted chests, which act as ATMs. For Mego, this is all about using one of the most popular games in the world to help further legitimize Bitcoin as the official currency of our inevitable cyberpunk future.

“We are a bunch of crazy gamers who want to make bitcoin the official currency of virtual worlds,” the studio wrote on its website. “Minecraft is the perfect platform to start the revolution.” Mego says it already has more than 1,200 registered users on its server, and it expects that number to grow.

In Minecraft, players get emeralds by finding the emerald ore in the world and mining them or by trading with computer-controlled nonplayer characters for food or items. I’m sure you’re waiting to hear that the catch is that you can also use bitcoins to buy emeralds from Mego, but that’s not the case.

“There isn’t, and never will be, a way to purchase the in-game currency since we aren’t trying to make a free-to-play scheme,” the developer wrote. “In fact, just the opposite: All emerald inside the game is found by other players because of their skill, luck, and karma, which is the way we think it should be.”

So, Mego is paying out bitcoins, but it won’t accept them in the game. The developer instead plans to fund this project through donations. And with it only giving out fractions of a penny at a time, it shouldn’t cost too much to keep the experiment running.

To build on the excitement of BitQuest, Mego is planning an event to that will award 1 bitcoin, worth around $350, to the person who constructs the best home on the server, according to Vice. The event will start in around two weeks. Architecture website Archdaily will judge the competition.