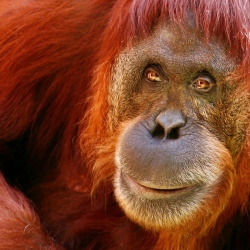 Chimpanzees and orangutans may experience a "mid-life crisis" like humans, a study suggests. An international team of researchers assessed the well-being and happiness of the great apes.

They found well-being was high in youth, fell to a low in midlife and rose again in old age, similar to the "U-shape curve" of happiness in humans. The study brought together experts such as psychologists, primatologists and economists.

Results are published in the Proceedings of the National Academy of Sciences. What we are testing is whether the U-shaped curve can describe the association between age and well-being in non-human primates as it does in humans," psychologist and lead author Dr Alexander Weiss of the University of Edinburgh told BBC Nature.