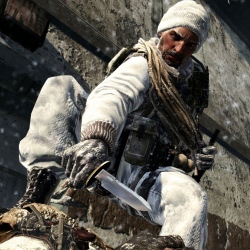 I guess it was only a matter of time before someone equipped Google Street View navigators with a gun. Pool Worldwide, a Dutch advertising company, did just that. The M4A1 pointed menacingly at blurry-faced people, cars and buildings. It even made shooting sound effects so you could take out unsuspecting pedestrians on your lunch break.

The website was more of a self-promotion gimmick than an attempt at making a poor man’s Call of Duty. But Google moved in quickly and disarmed the company, citing a terms of service violation and blocking the company’s access to Google Maps. Pool Worldwide, however, might just be thinking mission accomplished. The game was only up from Friday through late Monday night but peak traffic on the site saw about 3,000 visitors per minute. That’s some viral advertising.