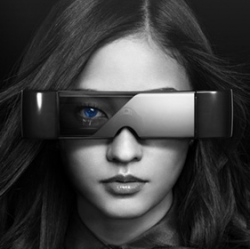 But, it’s not just how Google’s glasses look, their function also mirrors something out of the Terminator trilogy.

In December, rumors spread that Google was finishing up a prototype on high-tech glasses known as wearable head-up displays (HUD) that could tap into Google’s cloud-based location services and detail users’ surroundings. The information would then appear as an augmented reality computer display.

According to 9to5Google, these glasses can do all that and more. The glasses will reportedly have an extremely small front-facing camera with a flash to gather information and take photos, a navigation system that is used by head-tilting to scroll and click, I/O for voice input and output, and CPU/RAM/storage hardware nearly equivalent to a generation-old Android smartphone.