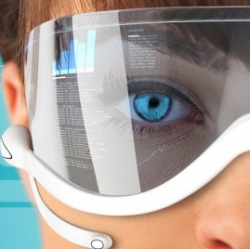 After weeks of hype, teasing and a few public appearances here and there, Google’s finally come clean on just how much augmentation its Project Glass HUD glasses will provide. The truth: Project Glass is going to disappoint (initially).

The eyewear that’s been paraded around by Google’s Sergey Brin and Sebastian Thrun is far from being the colorful and life-sized street-augmenting dream that Google showcased in its Project Glass concept video.

CNET reports that a Google spokesman confirmed that the little transparent display only "shows information above the wearer’s usual line of sight, ‘about where the edge of an umbrella might be.’"

In its initial form, Project Glass will focus on "simple interactions" such as taking photos and sharing them to Google+.

There you have it. Project Glass will not be a visual bombardment of augmented reality icons that’ll make you want to vomit and likely get hit by oncoming traffic. Now that the thunder has died down, Google’s going for a more sensible approach for Project Glass’s applications. After all, how can this kind of thing change the world if nobody can afford it (because more features equals higher price tag) or people keeping bumping into street poles?

The tech’s going to evolve as Google figures out how to sort out the kinks. It’s a good thing Google’s putting a lid on all the smoke before it turns into an uncontrollable fire of unachievable expectations. Let’s try to do things that are within the realm of possibility with today’s technologies and research before we jump the gun.