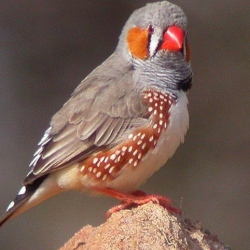 Scientists at Glasgow University say they have found a key genetic indicator of how long an individual will live.

They say the lengths of tiny pieces of DNA called telomeres indicate whether a young creature is likely to live long into old age.

But before you rush out to get your telomeres stretched – were such a process possible – it is worth pointing out that the creatures they have been working with are not humans but altogether shorter-lived zebra finches.

Everything that is made up of living cells contains chromosomes: the genetic code that makes us what we are.

At the ends of each chromosome lie the telomeres. They have been likened to the caps on the ends of shoelaces – they stop things from unravelling.

Over time they wear down – and when they do, the DNA they protect is compromised and the cell can malfunction or die.

This is where the zebra finches came in: how early and accurately could longer telomeres predict a longer life?

To find out, the Glasgow researchers collaborated with colleagues at Exeter University, with Glasgow’s Prof Pat Monaghan leading the team.

Tiny blood samples were taken from a group of 99 zebra finches and the lengths of their telomeres measured. They were tested again throughout their lifetimes.