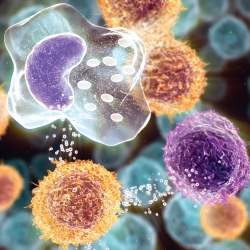 Today, scientists made a major step in cancer research; they identified the underlying genetic cause behind a rare form of carcinoma cancer, chordoma.

This discovery puts the emerging field of genomics on the map, may speed up the drug approval process, and reduces the risks associated with groundbreaking research for venture-funded biotech companies. For genetics researchers, it adds credence to the theory that studying rare cancers may reveal more fundamental aspects of cancer biology that are relevant across all types.

“There is a school of thought that rare cancers tend to be more genetically similar and easier puzzles to solve than more common cancers,” said Josh Sommer, executive director of the Chordoma Foundation.

The Chordoma Foundation, a Durham North California-based nonprofit, identified a specific genetic risk factor that increases the chances that an individual will develop chordoma. Researchers at University College London, Royal National Orthopedic Hospital, and the Sanger Institute, found that over 95 percent of Caucasian chordoma patients have a variation in the DNA sequence at a site on the T gene.


“Our finding that this variation is associated with a five-fold increase in the risk of developing chordoma is remarkable in cancer genetics,” said Dr. Adrienne Flanagan of UCL, who led the study. “It is a major step forward in our understanding of how chordoma develops and can open the door to the development of an effective, targeted treatment.”