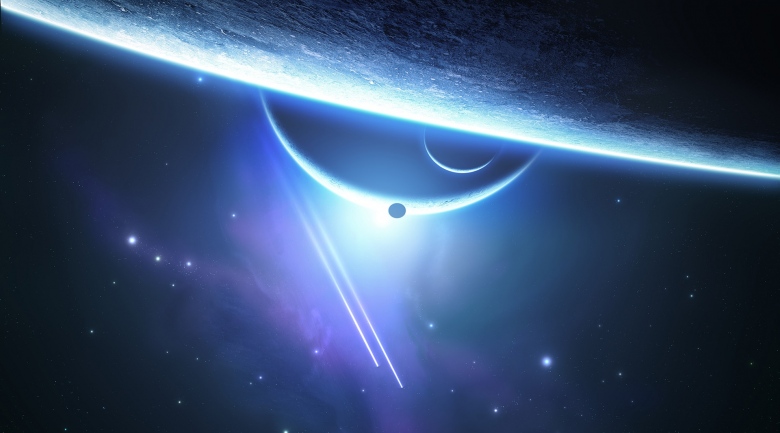 Our galaxy may be awash in homeless planets, wandering through space instead of orbiting a star.

In fact, there may be 100,000 times more "nomad planets" in the Milky Way than stars, according to a new study by researchers at the Kavli Institute for Particle Astrophysics and Cosmology (KIPAC), a joint institute of Stanford University and the SLAC National Accelerator Laboratory.

If observations confirm the estimate, this new class of celestial objects will affect current theories of planet formation and could change our understanding of the origin and abundance of life.

"If any of these nomad planets are big enough to have a thick atmosphere, they could have trapped enough heat for bacterial life to exist," said Louis Strigari, leader of the team that reported the result in a paper submitted to the Monthly Notices of the Royal Astronomical Society. Although nomad planets don’t bask in the warmth of a star, they may generate heat through internal radioactive decay and tectonic activity.

Searches over the past two decades have identified more than 500 planets outside our solar system, almost all of which orbit stars. Last year, researchers detected about a dozen nomad planets, using a technique called gravitational microlensing, which looks for stars whose light is momentarily refocused by the gravity of passing planets.

The research produced evidence that roughly two nomads exist for every typical, so-called main-sequence star in our galaxy. The new study estimates that nomads may be up to 50,000 times more common than that.

To arrive at what Strigari himself called "an astronomical number," the KIPAC team took into account the known gravitational pull of the Milky Way galaxy, the amount of matter available to make such objects and how that matter might divvy itself up into objects ranging from the size of Pluto to larger than Jupiter. Not an easy task, considering no one is quite sure how these bodies form. According to Strigari, some were probably ejected from solar systems, but research indicates that not all of them could have formed in that fashion.

"To paraphrase Dorothy from The Wizard of Oz, if correct, this extrapolation implies that we are not in Kansas anymore, and in fact we never were in Kansas," said Alan Boss of the Carnegie Institution for Science, author of The Crowded Universe: The Search for Living Planets, who was not involved in the research. "The universe is riddled with unseen planetary-mass objects that we are just now able to detect."

A good count, especially of the smaller objects, will have to wait for the next generation of big survey telescopes, especially the space-based Wide-Field Infrared Survey Telescope and the ground-based Large Synoptic Survey Telescope, both set to begin operation in the early 2020s.

A confirmation of the estimate could lend credence to another possibility mentioned in the paper – that as nomad planets roam their starry pastures, collisions could scatter their microbial flocks to seed life elsewhere.