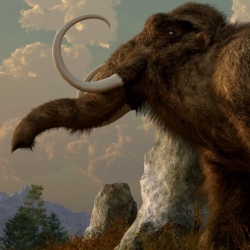 Those living in hope of one day seeing a woolly mammoth roaming about in a zoo cage and being able to feed it a few chips are in luck, as the best source of mammoth DNA yet — including what may be some “living” cells — has been discovered.

Researchers rummaging through a mammoth graveyard in Siberia made the find, locating “soft, fatty tissue, hair, bone marrow” of the cuddly old beast, with the real coup being the possibility that some of the cells are still deemed living, which means their DNA won’t have degraded and may, just may, be of some use in creating a modern-day for our amusement.

The mammoth material was found 100 metres below the surface of the ice, with expedition chief Semyon Grigoryev saying it’ll take until the end of the year, at least, before his team knows if the cells are dead or alive