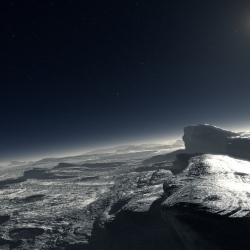 The scientists have proposed that these life-bearing planets originated in the early Universe within a few million years of the Big Bang, and that they make up most of the so-called "missing mass" of galaxies. The scientists calculate that such a planetary body would cross the inner solar system every 25 million years on the average and during each transit, zodiacal dust, including a component of the solar system’s living cells, becomes implanted at its surface. The free-floating planets would then have the added property of mixing the products of local biological evolution on a galaxy-wide scale.

Since 1995, when the first extrasolar planet was reported, interest in searching for planets has reached a feverish pitch. The 750 or so detections of exoplanets are all of planets orbiting stars, and very few, if any, have been deemed potential candidates for life. The possibility of a much larger number of planets was first suggested in earlier studies where the effects of gravitational lensing of distant quasars by intervening planet-sized bodies were measured. Recently several groups of investigators have suggested that a few billion such objects could exist in the galaxy. Wickramasinghe and team have increased this grand total of planets to a few hundred thousand billion (a few thousand for every Milky Way star) – each one harbouring the legacy of cosmic primordial life.