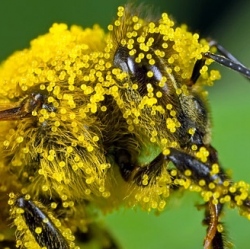 Scientists at the University of Eastern Finland say they hope to have an allergy vaccine on the market in five to seven years.

For everything, from pollen to cat hair.

The antibody immunoglobulin E (IgE) works as the sneezy gatekeeper for allergies: it causes your white blood cells to release histamine, which in turn causes all of your favorite allergic responses, from a watery eyes to hay fever. Now, a team of scientists led by Professor Juhu Rouvinen have found a means of genetically modifying allergens so they won’t bind with IgE, while still allowing them to interact with immunoglobulin G. IgG is the friendly cousin of IgE; it keeps allergies out by stopping the IgE-allergen complex from forming. That could block histamine from coming out of white blood cells, and thus block that runny nose. After that, it’s simple, at least in theory: Just load a modified version in a shot and let the immune system take care of the rest.

Five to seven years might be a few too many springs away for allergy sufferers, but the team has formed a bio-tech company, Desentum, to help in production.