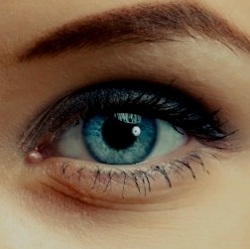 Our eyes are designed to flush out any contaminants that get into them. While this is generally a good thing, it’s not so helpful when it comes to administering medication in the form of eye drops, up to 95 percent of the medicine is typically flushed out before it’s able to work. Now, however a solution is in development.

Working with a team of graduate students, McMaster University’s Prof. Heather Sheardown has created microscopic packets of medicine that are suspended in a carrier liquid.

She tells us that when applied in the form of eye drops, these "molecular packets" adhere to the mucus layer of the tear film that covers the eye. This causes them to remain on the cornea instead of being washed away. Over the next several days, they gradually dissolve and release their payload into the eye.

Conceivably, this means that people currently needing to use eye drops on a daily basis could instead apply them once a week. Additionally, of course, it would result in less wasted medication.

According to Sheardown, there has been interest in developing the technology commercially. She will be presenting her research to the Tear Film and Ocular Surface Society in France, later this month.