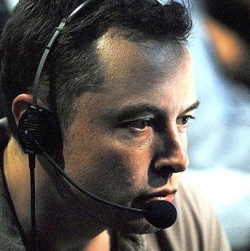 You claim to be getting away from the government-assisted model of space flight engineering and the lack of innovation that approach entails. Yet your website says your Falcon 9 rocket’s main Merlin engine design is inspired by the Apollo lunar module main engine. So you still depend on government-inspired inventions?

Heh [laughs]. We should probably change that text, it’s probably not the best in the world. That’s a bit like saying a modern-day car is based on what Daimler and Benz did. We’re in fact using something that’s far more advanced than they had on the moon, which was a type of injector called a pintle, a large single coaxial injector – and that was the basic architecture we used. We said that originally because it had to be super safe – it was a single point of failure – and it’s a type of engine architecture that is naturally stable and is not subject to combustion harmonics that can cause a combustion chamber to explode.

What kind of technology do you really want to advance, given the freedom you have to do it your own way?

The really big advance, the fundamental breakthrough that’s needed, is a fully reusable rocket system. There was an attempt at that with the space shuttle but it failed. The space shuttle was only ever going to be partially reusable as the main tank – the primary flight structure to which the orbiter and booster were attached was discarded on every mission. And the parts that were reused were so difficult to reuse that the shuttle ended up costing four times more to run than an expendable rocket of equivalent payload capacity. The space shuttle was often used as an example of why you shouldn’t even attempt to make something reusable. But one failed experiment does not invalidate the greater goal. If that was the case we’d never have had the light bulb.

Can you outline the economics?

The fuel, oxidiser and pressurant on a Falcon 9 rocket accounts for about 0.3 per cent of the cost of the mission, about $200,000. But each mission costs $60 million because we have to make a new rocket every time.

And SpaceX manages that by doing everything possible in house, without significant outsourcing?

We are trying to make a huge difference – by advancing space technology substantially. To do that we had to design the Falcon rockets from scratch because the space supply chain is just not an effective one. At SpaceX we make the engines, the avionics, the primary structure – I think we’ve got a fundamentally better design: our airframe, engines, electronics and launch operations are much lower cost.

What about performance though? Anyone can cut costs.

Our engine has the highest thrust-to-weight ratio of any engine in the world, our airframe has the best mass fraction of any rocket in the world – and our electronics are the lightest and have have the most computing power over that of any other rocket.

What is it that makes your rockets capable of scaling from low Earth orbit missions to Mars trips?NASA needs a complete redesign for such ideas.

I am not saying the rockets we have today are suitable for taking people to Mars. Our spacecraft would be pretty uncomfortable for a six-month journey. It’s the next generation of our rockets that could do that.

Will they be recognisable evolutions of the Falcon 9 series? Or radically different?

The booster part of it will probably be recognisable compared to the next generation of Falcon we’re unveiling this year or early next.

SpaceX is crew-rating your capsule and says your "guiding star" is safety. How much of a challenge is it to crew-rate the Dragon?

There’s a lot of testing that needs to take place. I made sure the basic design of it is suitable for crew from the beginning. That’s why it has windows and returns safely to Earth. The technology driver there is our launch escape system, which has high thrust liquid-fuelled escape engines built into the side walls of the vehicle.

I gather that these hypergolic motors might have planetary landing applications?

Yes. The escape system’s motors will allow the capsule to land anywhere in the solar system, whether it has an atmosphere or not – and that’s pretty cool. These motors can even fire supersonically which is important for Mars: in the higher altitudes of Mars the atmosphere is so thin that parachutes are completely pointless. So retro thrusters have to be able to fire when you are supersonic so they have to be very high thrust.

What is it about you and your fellow internet entrepreneurs like Amazon’s Jeff Bezos, and the Google guys, that is attracting them to commercial spaceflight, with Sierra Nevada and Planetary Resources respectively?

The common thread is that we all have a natural inclination to push the frontiers of technology. And space is a very high capital endeavour. So you need to have done something big to get you the capital to do something in space – you can’t just create a start-up with no capital, especially in the rocket business.

It strikes me that your tight in-house control of product design mirrors the way Apple works. Do you see similarities? Is SpaceX aiming to be the Apple of space flight?

Yes, I guess there are similarities. In the case of Apple they did originally do production internally but then along came unbelievably good outsourced manufacturing from companies like Foxconn. We don’t have that in the rocket business. There’s no Foxconn in the rocket business. And rocket technology is also considered an advanced weapons technology so you can’t really have such a situation – so in our case manufacturing is necessary.