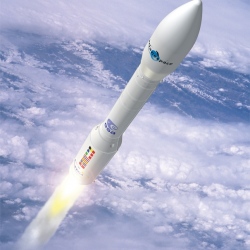 Feb. 10 (Bloomberg) — Elon Musk, chief executive officer of Space Exploration Technologies Corp., wants the private rocket-launch business to have an initial public offering in 2013, the entrepreneur’s third such sale in about three years.

“There’s a good chance that SpaceX goes public next year,” Musk, 40, said yesterday in an interview at the company’s headquarters in Hawthorne, California, without elaborating.

Tesla Motors Inc., Musk’s electric-car company, sold shares for the first time in 2010. SolarCity Corp., a developer of rooftop solar-power systems of which Musk is chairman, is also preparing to file for an IPO this year, three people with knowledge of the matter have said.

SpaceX has contracts to launch satellites and is scheduled to begin shipping cargo to the International Space Station in April. Musk started the company in 2002 with money from that year’s IPO of PayPal Inc., which he co-founded, and the subsequent sale of his stake in the Internet-payment company when it was acquired by EBay Inc.

“SpaceX, in terms of launches awarded, is the world leader in space launch,” Musk said. “We’re beating the Russians, the Chinese, the Europeans, everyone.”

Clayton Mowry, president of Arianespace Inc., the U.S. affiliate of Europe’s Arianespace satellite and rocket launch company, said in an e-mail his company has more than three years of orders for launches with a total value of 4.6 billion euros ($6.07 billion).