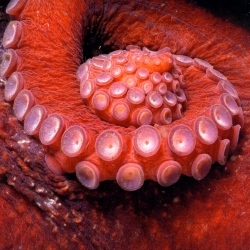 Marine biologists are starting to get a good idea now of how squid hear and how they react to sounds in the ocean.

It is only recently that scientists have come to accept that cephalopods have any auditory capability at all.

But new experiments show noises of varying loudness and frequency will elicit a range of behaviours in the animals – such as jetting or inking, and even a change of colour.

The research has been featured at the biennial Ocean Sciences Meeting.

It was presented by Aran Mooney from the Woods Hole Oceanographic Institution (WHOI) of Massachusetts, US.

He is interested in squid because they represent something of a keystone species in the ocean, sitting right at the heart of many food webs. If they are not the predator in those webs, they will almost certainly be the prey.

And that makes it important to know whether anything we may be doing in the oceans could be unsettling them.

"A lot of that is low-frequency noise, which is what squid detect. And if we’re influencing these animals then presumably we could change their behaviour."

Previous work at WHOI’s Sensory Physiology and Sensory Ecology Lab had established that squid could hear sounds in the range of 50Hz to 500Hz; but they are best below 300Hz. It is the same sort of range as fish.

"I think of a statocyst as an inside-out tennis ball," explains Dr Mooney.

Aran Mooney has recently been testing cuttlefish, which display subtle behavioural differences "It’s got hairs on the inside and this little dense calcium stone that sits on those hair cells.

"What happens is that the sound wave actually moves the squid back and forth, and this dense object stays relatively still. It bends the hair cells and generates a nerve response to the brain."

The latest research has attempted to gauge exactly what sound means to the squid, and how they might use it.