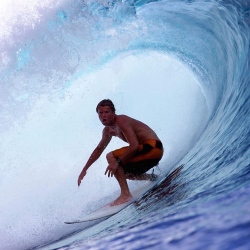 When I became an entrepreneur at the age of twenty-three, I began in earnest, as do all entrepreneurs, chasing a dream. My dream was clear. I would build a consumer technology company that reached ten million people and sell the company for millions of dollars, before the age of thirty. Then, as the dream went, I would retire to an oceanfront house on a warm Pacific beach and learn how to surf.

I recently had the fortune of celebrating a year in which I saw that lofty goal fulfilled. My company’s iPhone apps had over ten million downloads, and a competitor paid a large sum of money to acquire what we had built, just a week before my thirtieth birthday. Dream had become reality.

I took a trip soon after to a secluded surf beach on the Pacific coast of Nicaragua. Sandy-bottom beach break. White sand. House so close to water that the sound of crashing waves made it hard to sleep. This was it. I had made it.

Yet, as I sat dangling my feet off a seven-foot surfboard, missing wave after perfect wave, I saw an unmistakable truth. I was terrible at surfing, and all I really cared about anymore was launching another hit app. Far from retiring, I found myself more in the thrall of ambition than ever before.

Having risked my career in order to escape, at all costs, the Great American Rat Race, this was disconcerting to me. My entrepreneurial intentions had, after all, been pure at the outset. I was drawn to entrepreneurship by the lure of freedom: control of my time, the ability to work on my own creations, no boss, and, of course, the potential for independent wealth. But the purpose of the money was never to buy fancy cars and houses, or to be richer than my peers. I viewed the money simply as a lifelong guarantee of these freedoms. When I had enough wealth to live modestly for the rest of my life without working another day, I would quit. I would stop chasing the dream. And yet here I am, still slaving away. How could this be? I am not one of those miserable over-achieving types who are satisfied with nothing less than better-than-everyone-else. Really. I’m not.

You see, a funny thing seems to have happened just before I reached the ten million users mark. That goal of mine nefariously shifted by just a bit, a decimal point to be precise. I have a new goal now. It’s 100 million.

This is the disillusionment of the entrepreneur. There is no such thing as success. It is a moving target. A mirage. By the time you attain what you thought was your wildest dream, reality has moved on and left your dreams in the dust. And the desire for success grows stronger still.

I do not like being enslaved, by anything. There are times when I can feel ambition, that greatest of American virtues, imposing its power over me. There are times when I succumb, for a short while. But to allow myself to be driven by ambition alone would be the ultimate failure. I strive for happiness. Not happiness when I am sixty, but happiness now, and tomorrow, and the day after. And although ambition and happiness can coexist, I have found that the first much more readily thrives without the other.  I understand this now, as I understood it at twenty-three, and my values are unchanged. What can then explain the control ambition has over me today?

Many who run in entrepreneurial circles would say that my dream was insufficient in the first place. Indeed, Silicon Valley frowns upon such middling goals as selling one’s company for mere millions. We should aim for billions, we are told, or not aim at all. I am loath to admit that I have let that over-achiever’s ethos influence my own thinking, but I suppose it is at least partially true.

That’s not the only reason though. While my values have not changed, what has changed is this: work is more fun than it used to be when I was twenty-three. Work actually makes me happy. I always enjoyed entrepreneurship, even though I had many setbacks and failures along the way, but it is infinitely more fun now that I have had some tangible success. This is the real reason I continue. Success builds upon itself, and in so doing, makes the journey more fun. That is not to say I won’t still have failures, in abundance; I am certain I will. Yet underlying the day-to-day failures is the knowledge that I can never truly fail again, because if success does not exist, neither does failure. I am finally free. I am free of the fear of failure. Perhaps that was my dream all along.

I’ll still learn how to surf one day, as soon as I reach that 100 million.