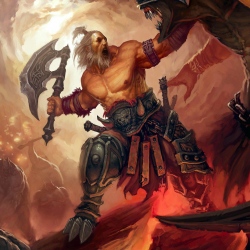 The facility allows users to buy and sell objects found in the title using real currency.

The publisher takes a cut of each transaction, securing a new source of profits.

It has warned that subscribers found guilty of using hacks or other attempts to cheat face a lifetime ban.

Diablo 3 takes place in a horror-themed fantasy world in which players team up to save their land from monsters.

Its in-game auction houses – in which gold, weapons, armour and other materials can be bought and sold – were originally supposed to have been launched on 22 May.

However, the move was delayed following reports that some users had had their accounts hacked, and that items and characters had been stolen.

Blizzard has now opted for a more limited launch. Auctions are initially restricted to equipment – commodities will follow at a later date – and several currencies including the Brazilian real and Argentine peso cannot be used yet.

"We are rolling out the elements of the real-money auction house separately to ensure all of our players have the smoothest possible experience," it said on its blog.

"We’ll have more information on the availability of the European real-money auction house and the remaining American currencies soon."

The firm has also introduced a range of security measures.

Players wishing to pay for transactions through its proprietary Battle.net system must either download an identification app to their smartphone or buy an authenticator – a physical device that produces a digital code.

Those wishing to buy goods via PayPal must sign up to a separate service that messages a special code to their phones which must be re-entered to complete the transaction.