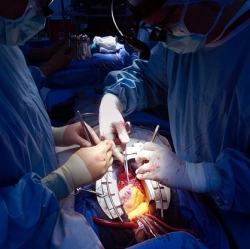 The reason some patients are cured of type-2 diabetes after a gastric bypass may have been explained by US researchers. Their animal study showed bypassing the stomach made the intestines work harder, use more energy and keep blood sugar levels under control.

They hope their findings, published in the journal Science, will lead to less invasive treatments for the condition. Diabetes UK said a healthy lifestyle was the best way to avoid the disease.

Type-2 diabetes, which is mostly the result of a bad diet and little exercise, is a growing problem globally. It leaves people unable to control the amount of sugar in the blood and can culminate in blindness, limb loss and heart disease.

The condition can be managed with insulin injections. Researchers at Boston Children’s Hospital, in the US, were investigating how a type of weight loss surgery affected diabetes.

Dr Nicholas Stylopoulos told the BBC: "Gastric bypass is the most effective weight loss procedure, but it also cures diabetes.

"If we knew how this worked we could develop new treatments that don’t require surgery."

Weight loss itself can reduce the symptoms of type-2 diabetes, however, the condition can be seemingly cured before any pounds have been shed.

The challenge for researchers was to figure out where the extra sugar, which should be ending up in the blood, was going.

They performed the operation to connect the entrance to the stomach with the small intestine – essentially bypassing the stomach – on rats. The animals were then scanned and the route of their meals was traced as they passed through the body.

"Surprisingly, we found the sugar was being used by the intestines – it has to work harder as you’ve bypassed the stomach," Dr Stylopoulos said.