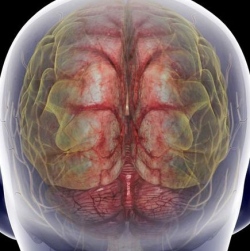 Like an overwhelmed traffic cop, the depressed brain may transmit signals among regions in a dysfunctional way. Recent brain-imaging studies suggest that areas of the brain involved in mood, concentration and conscious thought are hyperconnected, which scientists believe could lead to the problems with focus, anxiety and memory frequently seen in depression.

Using functional MRI and electroencephalography (EEG), psychiatrist Andrew Leuchter of the University of California, Los Angeles, and his colleagues measured the activity of depressed patients’ brains at rest. They found that the limbic and cortical areas, which together produce and process our emotions, sent a barrage of neural messages back and forth to one another—much more than in the brains of healthy patients. These signals, Leuchter says, can amplify depressed people’s negative thoughts and act like white noise, drowning out the other neural messages telling them to move on.

A separate study by psychiatrist Shuqiao Yao of Central South University in Hunan, China, produced a more nuanced view of these two areas’ hyperconnectivity. In work published in Biological Psychiatry in April, Yao and his colleagues reported that stronger links among certain corticolimbic circuits are seen in patients more prone to rumination, the act of continuously replaying negative thoughts. Less connectivity in other corticolimbic circuits corresponded to autobiographical memory impairments, which is another common feature that appears in depression.