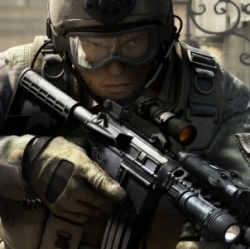 Headshots, money, and blink-and-it’s-over rounds. Not much has changed since the last time I regularly played Counter-Strike back in 2004. Sure, Valve and Hidden Path have given the shooter a facelift, but at this early stage in the closed beta, Counter-Strike: Global Offensive plays identically to the now 12-year-old Half-Life mod and its spruced-up Source engine remake. And I can’t decide whether or not that’s a good thing.

After pushing back the beta because alpha testers complained CS:GO didn’t "feel" like Counter-Strike, Valve finally began doling out access codes on November 30. I’ve been playing Dust — the CS classic and only map in the beta right now — for the past couple weeks, and I’d love to know what those alpha testers were talking about, because at this point, if you squint to blur the screen a bit, you’re playing the exact same game shooter fans have playing for more than a decade.

To be fair, Valve explicitly states that the closed beta features a limited build of CS:GO, and new maps and modes are in the works (for a detailed rundown on what’s on the way, check out our What’s New in Counter-Strike? feature). That’s all well and good, but the fact remains that all but the hardest of the hardcore CS players will see nothing has been done to fundamentally change or, more importantly, add to gameplay. There is still no healing, no respawning, no automatic health regen, no aiming down the iron sights (which drives me squirrel-poo nutty), no classes, no skills, no vehicles (save for the chopper that drops off the Counter Terrorists), no cover system, no peeking/leaning, no prone, no killstreak rewards, no leveling/unlock system, and no next step forward for the FPS genre. See the video below for a sample of the CS:GO beta in action: