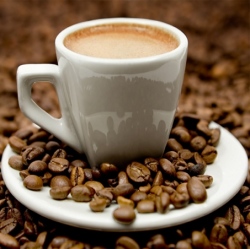 Older adults who drank coffee — caffeinated or decaffeinated — had a lower risk of death overall than others who did not drink coffee, according a study by researchers from the National Cancer Institute (NCI), part of the National Institutes of Health, and AARP.

were less likely to die from heart disease, respiratory disease, stroke, injuries and accidents, diabetes, and infections, although the association was not seen for cancer. These results from a large study of older adults were observed after adjustment for the effects of other risk factors on mortality, such as smoking and alcohol consumption. Researchers caution, however, that they can’t be sure whether these associations mean that drinking coffee actually makes people live longer. The results of the study were published in the May 17, 2012 edition of the New England Journal of Medicine.

Neal Freedman, Ph.D., Division of Cancer Epidemiology and Genetics, NCI, and his colleagues examined the association between coffee drinking and risk of death in 400,000 U.S. men and women ages 50 to 71 who participated in the NIH-AARP Diet and Health Study. Information about coffee intake was collected once by questionnaire at study entry in 1995-1996. The participants were followed until the date they died or Dec. 31, 2008, whichever came first.

The researchers found that the association between coffee and reduction in risk of death increased with the amount of coffee consumed. Relative to men and women who did not drink coffee, those who consumed three or more cups of coffee per day had approximately a 10 percent lower risk of death. Coffee drinking was not associated with cancer mortality among women, but there was a slight and only marginally statistically significant association of heavier coffee intake with increased risk of cancer death among men.

"Coffee is one of the most widely consumed beverages in America, but the association between coffee consumption and risk of death has been unclear. We found coffee consumption to be associated with lower risk of death overall, and of death from a number of different causes," said Freedman. "Although we cannot infer a causal relationship between coffee drinking and lower risk of death, we believe these results do provide some reassurance that coffee drinking does not adversely affect health."

The investigators caution that coffee intake was assessed by self-report at a single time point and therefore might not reflect long-term patterns of intake. Also, information was not available on how the coffee was prepared (espresso, boiled, filtered, etc.); the researchers consider it possible that preparation methods may affect the levels of any protective components in coffee.

"The mechanism by which coffee protects against risk of death — if indeed the finding reflects a causal relationship — is not clear, because coffee contains more than 1,000 compounds that might potentially affect health," said Freedman. "The most studied compound is caffeine, although our findings were similar in those who reported the majority of their coffee intake to be caffeinated or decaffeinated."