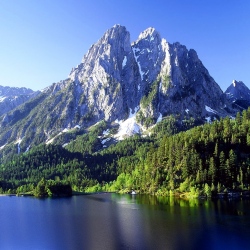 Britain’s warm, wet winter brought floods and misery to many living across southern England, with large parts of Somerset lying underwater for months. When in January rainfall was double the expected average over wide areas, many people made cautious links between such extreme weather and global climate change.

There were nay-sayers at the time but it now seems that there is evidence for those links. Speaking at the European Geosciences Union annual meeting here in Vienna, Myles Allen, a professor of geosystem science at the University of Oxford, presented his take on the issue.

At the gathering of more than 12,000 geoscientists, Allen reported an ambitious computer experiment that his team has undertaken over the last two months to test whether the winter floods could be attributed to climate change. And it seems that they can be linked.

The floods of January 2014 certainly were extreme. According to Oxford’s records of daily rainfall, they were unprecedented in 250 years. The records at the UK Met Office from the 20th century also show that this winter was, historically, uniquely bad.

The IPCC report does suggest that extreme weather events should be expected as the world warms but the prediction is couched in cautious terms and the risk is assessed as “medium” confidence.