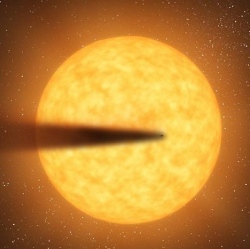 Astronomers have for the first time, found a rocky planet that’s slowly being vapourised by the blistering heat of the star it’s orbiting.

Their report in the Astrophysical Journal and available through the prepress website Arxiv.org, shows the unusual discovery was made after researchers detected strange luminosity readings from a star 1500 light years away.

The scientists, led by Dr Jon Jenkins from the SETI Institute, were using NASA’s planet hunting Kepler space telescope when the unusual light curve readings were discovered.
Jenkins says working out what they were seeing involved an extensive process of elimination.

"We first had to rule out a range of possible scenarios like binary planets in complicated orbits blocking out some of the star’s light," he says.
"Only after eliminating all other possibilities were we able to conclude that the unusual light readings are most likely caused by a long comet-like debris trail behind a disintegrating planet not much bigger than Mercury."

"Then things started clicking into place and all the lights went green."
The planet is circling extremely closely to an orange dwarf star called KIC-12557548, taking just 15 hours to complete each orbit.
The star has a surface temperature of about 4200°C.

The planet’s surface is estimated to be as high as 1800°C, hot enough to melt and evaporate rocks leaving a trail of submicron-sized dust grains, most likely pyroxene or aluminium oxide.
"We worked out the planet’s size (about a tenth the mass of Earth) by determining how big it had to be to still remain in one piece, and yet be small enough to leave such a huge dust and debris trail," says Jenkins.

"That’s why this is still somewhat of a hypothesis."
"The team are now actively seeking to make complementary observations with other telescopes and facilities to see whether we can nail this down for certain."
Exogeology in action

Astronomers already know of gas giants, often called hot Jupiters, which are slowly evaporating as they orbit too close to their host stars, but this is the first time it has been detected occurring to a rocky planet.

"The physics are different here, so this would be the first example of exogeology," says Jenkins.
"We may well be seeing the end of evolution of a planetary system in progress, and that would be very exciting".
Jenkins says that while there may be other rocky planets undergoing a similar process, they are quiet fortunate to be able to see this one.

"We have a number of examples of super Earths in short period orbits," he says.
"Kepler 10b and Corot 7b are both in 20 hour orbits around their host stars, snd we know both those stars are much hotter than KIC-12557548."

"So we may just be lucky to be seeing this happening around a star cool enough to allow dust grains to form."
"If this star was hotter, the dust grains would evaporate too quickly for a smoke trail to form."