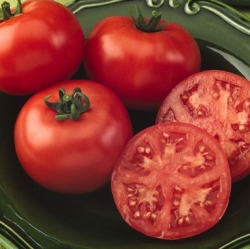 A team of US scientists have identified the compounds responsible for making a great tasting tomato, which could one day lead to the demise of the bland-tasting supermarket variety.

Why some home-grown tomatoes are a joy to eat and others – typically sold in supermarkets – are so bland has been a puzzle to many.

But a team of scientists from the University of Florida think the secret rests in a dozen or so volatile compounds.

The team, led by Professor Harry Klee, examined 152 types of ‘heirloom’ varieties to determine what makes the best tasting tomato. They publish their findings today in the journal Current Biology.

First, the researchers looked at the levels of sugars, acids and aroma volatiles – molecules that vaporise and release their smell into the air.

They then conducted a series of taste tests with some of the heirloom varieties, as well as supermarket-bought varieties, asking the volunteers to assess the level of flavour intensity, sweetness and sourness.

Comparing the results of the taste tests with the analytical readings, the researchers were surprised to find that the sweetest-tasting tomatoes did not necessarily contain the highest level of sugars. One particular type of apocarotenoid made the tomatoes taste sweeter.

"In other words, there are volatile chemicals unrelated to sugars that make things taste sweeter," says Tieman.

They also found that the most abundant volatiles did not contribute to ‘likeness’, while other less abundant ones did.

This raises the possibility that some foods trick us into thinking they are sweet by using our nose instead of our tongue.

The team are now breeding tomatoes that produce more apocarotenoids to look for a genetic link to flavour.

"Consumers care deeply about tomatoes," says Tieman. "One could do worse than to be known as the person who helped fix flavour."

For the record the tomato that was rated best was the small, sweet Cherry Roma.