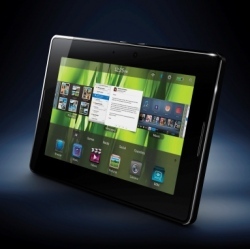 The firm also suggested it would refocus on the corporate market rather than on individual consumers.

Chief technology officer David Yacht will also be standing down.

Shares in the company fell as much as 9% in after-hours trading following the trading statement. They have fallen by 80% over the past year.

Shipments of BlackBerry smartphones in the quarter fell to 11.1 million, down 21% from the previous three-month period.

Shipments of the company’s PlayBook tablets hit 500,000, largely due to substantial discounting.

For the full financial year, the company made a net profit of $1.2bn, down from $3.4bn in the previous year.

The results were worse than analysts had expected and RIM shares fell sharply in after-hours trading.

RIM has struggled to keep up with rivals in the smartphone market, such as Apple’s iPhone and handsets running on Google’s Android operating system.

It has also struggled to gain a foothold in the tablet market.

Newly-appointed chief executive Thorsten Heins said the company would now focus on its traditional core market of corporate customers rather than on individual consumers as part of a strategy to turn the business around.

"We plan to refocus on the enterprise business and capitalise on our leading position in this segment," he said.

"We believe that BlackBerry cannot succeed if we tried to be everybody’s darling and all things to all people. Therefore, we plan to build on our strength."

Analysts said the company could continue to struggle until it became clear whether this turnaround plan would succeed.

"They clearly have no fix on when this process will bottom, and until it really does, it’s going to be very difficult for a lot of investors to come back in," said Eric Jackson at Ironfire Capital in New York.