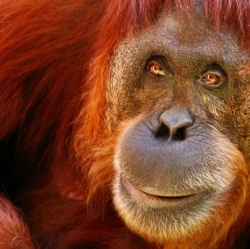 A study recently revealed that when great apes watch a film, they anxiously prepare for a scene’s exciting culmination. This discovery was determined through the use of the most advanced eye tracking technology, and the creation of two short films. By following eye movements, the researchers were able to observe and determine what apes were looking at on the screen.

In the first film, a man dressed in a gorilla suit enters the scene through one of two identical doorways and attacks a researcher. The second time the apes watched this film, 24 hours later, their eyes looked in anticipation toward the door they knew the man in the gorilla suit entered when they first watched the movie, they were expecting his entrance before it took place.

In the second film, a man dressed in a gorilla suit attacks a researcher and than the researcher grabs one of two foam weapons and attacks the man in the gorilla suit. During the second viewing, the positioning of the foam weapons was reversed. However, when the apes watched this film for the second time their eyes moved to the weapon they remembered was utilized in the first viewing, despite the change in location.

These findings indicate that the "moviegoers" remembered what they had seen previously, shedding new light on the long-term memory of apes, particularly chimpanzees and bonobos, which were used in this study. With just one viewing, the apes took note of an ongoing event and encoded it into their long-term memory. While there have been a variety of observational studies on apes’ long-term memories by seeing how they retrieve information from the distant past, this is the first study to examine how a non-human stores information of an ongoing event after a single viewing.

The "anticipatory looks" of the apes were so telling that the scientist said they would use this technology again in order to study other high-level cognitive functions of apes, including the capacity to recognize that other beings can have different opinions, wants and beliefs.