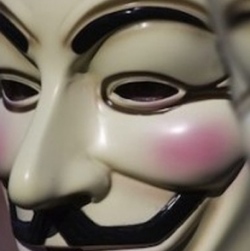 Christopher Doyon, a.k.a. Commander X, sits atop a hillside in an undisclosed location in Canada, watching a reporter and photographer make their way along a narrow path to join him, away from the prying eyes of law enforcement.

It’s been a few weeks of encrypted emails back and forth, working out the security protocol to follow for interviewing Doyon, one of the brains behind Anonymous, now a fugitive from the FBI.

Doyon, who readily admits taking part in some of the highest-profile hacktivist attacks on websites last year — from Tunisia to Orlando, Sony to PayPal — was arrested in September for a comparatively minor assault on the county website of Santa Cruz, Calif., where he was living, in retaliation for the town forcibly removing a homeless encampment on the courthouse steps.

Thanks to his indictment, Doyon is one of the few Anonymous members whose real name is now publicly known.

But as the leader of the People’s Liberation Front — a hacker group allied with Anonymous — and the second-most wanted information activist after WikiLeaks’ Julian Assange, he prefers not to show his face, and instead dons the ubiquitous Guy Fawkes mask, to wear with his Sunday best: a sweatshirt with the Anonymous calling card, “We do not forgive … We do not forget.”

Terrorists to some, heroes to others, the jury is still out on Anonymous’s true nature. Known for its robust defence of Internet freedom – and the right to remain anonymous — Anonymous came in first place in Time Magazine’s 2012 online poll on the most influential person in the world.

Fox News, on the other hand, has branded the hackers “domestic terrorists,” a role Anonymous has been cast to play in the latest Call of Duty Black Ops II, in which Anonymous appears as the enemy who takes control of unmanned drones in the not-too-distant future. (That creative decision may have put Activision, the creator of the video-game series, at the top of the Anonymous hit list.) For its part, much of what Anonymous does and says about itself, in the far reaches of the Internet, cannot be verified. Nor do all Anons agree on who they are as a group, and where they are going.