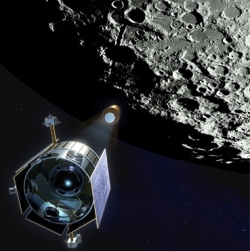 The magnetic anomalies are perplexing because unlike metallic minerals deposited by an asteroid, normal lunar rocks cannot record a magnetic field. “Those things are really non-magnetic,” says Ian Garrick-Bethell, a planetary scientist at the University of California, Santa Cruz. “The puzzle has been, how do you form these anomalies — how do you get anything that’s that magnetic?”

Perhaps, scientists report in the March 9 Science, the magnetic material arrived billions of years ago when a huge object rocked the moon, digging a hole in the farside and splashing debris across the surface. The impact formed the South Pole-Aitken basin, perhaps the largest impact crater in the solar system. Most of the anomalies are next to the mammoth crater, but scientists hadn’t linked the locations until now.

The basin averages about 2,200 kilometers in diameter — or roughly 10 times as big as the crater left by the dino-killing asteroid slammed into Earth 65 million years ago. “You definitely would not have wanted to be standing on the surface of the moon at that point,” says study coauthor Mark Wieczorek, a planetary geophysicist at the Institute of Earth Physics of Paris.

Wieczorek and colleagues used magnetic and topographic maps to identify the association. Simulating the collision then showed where easily magnetized debris might have landed. “The moon should’ve been basically contaminated with magnetic material from this thing,” says study coauthor Benjamin Weiss, a planetary scientist at MIT. “Throw a little bit of meteorite fairy dust in there, and it can really basically control where the magnetic fields are recorded.”

Generating magnetized patches without the fairy dust is tricky. Fields as strong as those observed would require deposits of farside lunar rocks more than 100 kilometers thick. “That’s thicker than the crust of the moon itself,” Wieczorek says.