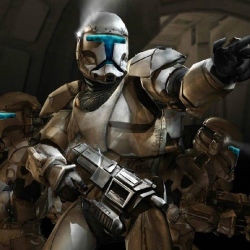 Electronic Arts shareholders are being sorely tested again after the video game giant posted good earnings but warned about a tough quarter ahead. The stock has fallen 4.8 percent today to $14.41 a share, valuing EA at $4.77 billion. That takes it back to its valuation to around 1999 levels.

A group of analysts who cover the company have had their patience tested as EA makes the transition from a company that sells $60 packaged goods games in retail locations to a digital company with titles on the online, social network, and mobile game platforms. EA talks about focusing on brands, platforms, and talent. Here’s a summary of what some of the analysts said today in their research notes.

Atul Bagga, an analyst at Lazard Capital Markets, said that the performance of Star Wars: The Old Republic, which went from 1.7 million subscribers to 1.3 million, disappointed. He is optimistic about EA’s platform strategy, where it will leverage its database of 220 million online gamers. He noted Origin’s revenue was $150 million in the fiscal year, up four-fold from a year ago. The Play4Free freemium web platform generated $23 million in the fourth fiscal quarter, up 80 percent. Bagga said he was encouraged by the long tail of digital sales of console games, a healthy pipeline for social and mobile, and strong mobile execution. He lowered estimates, reflecting a delay of one of EA’s mystery titles.

Michael Pachter, analyst at Wedbush Securities, said he expects the recent momentum in digital revenues to continue with increased adoption of EA Origin, Star Wars subscription payments, The Sims Social and the release of Sim City (slated for this fall). He thinks digital revenue could grow from $1.2 billion for the year ended March 31 to $1.7 billion in then next fiscal year. But he noted that the change in guidance for lower revenues in the coming quarter magnified concerns about a potential decline for Star Wars this year and weak packaged goods sales for the whole video game industry.

Ben Schachter of Macquarie Securities said that the company was previously too optimistic about EA’s transition to digital games. In February, he cut his estimates. But now, he is slightly more positive, since EA’s long-term margin expansion and revenue goals around key brands is still viable. Consoles are weak but digital should grow 20 percent in the next few years. He said internet connectivity for the television st is coming and that could lead to more game sales. He said those who shorted (bet its stock price would fall) EA have seen their bets pay off, and now that will reduce downward pressure on the stock.

“Given the company’s execution history, we are not yet ready to upgrade, but we see limited downside from current levels,” Schachter said. “A key problem for video game stocks remains investor apathy. While this issue will not turn overnight, we believe valuation can bring more value investors to the table and potential catalysts such as E3 (the key industry conference in early June), new hardware launches, and the powerful theme of increasing Internet use through mobile devices and televisions will also draw attention to the industry.” He said he believes in the stock because the digital transition will lead to higher margins.

Arvind Bhatia, an analyst at Sterne Agee, said that the guidance for the coming year wasn’t as bad as feared. He believes that EA’s stock will go back up as the console cycle begins anew. Bhatia believes that the title that was delayed was Overstrike, a game that EA will publish for Insomniac Games. EA will launch 14 packaged goods games in fiscal 2013, compared with 22 in fiscal 2012. But EA will publish 41 digital titles. He is raising estimates slightly. He believes the majority of EA’s new investment in future consoles will be directed toward Sony and Microsoft consoles, not Nintendo’s Wii U.