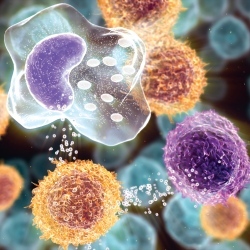 To solve a mystery, sometimes a great detective need only study the clues in front of him. Like Agatha Christie’s Hercule Poirot and Arthur Conan Doyle’s Sherlock Holmes, Tomomi Kiyomitsu used his keen powers of observation to solve a puzzle that had mystified researchers for years: in a cell undergoing mitotic cell division, what internal signals cause its chromosomes to align on a center axis?

"People have been looking at these proteins and players in mitosis for decades, and no one ever saw what Tomomi observed," says Whitehead Institute Member Iain Cheeseman. "And it’s very clear that these things are happening. These are very strong regulatory paradigms that are setting down these cell division axes. And careful cell biology allowed him to see that this was occurring. People have been looking at this for a long time, but never with the careful eyes he brought to it."

Kiyomitsu, a postdoctoral researcher in Cheeseman’s lab, published his work in this week’s issue of the journal Nature Cell Biology.

The process of mitotic cell division has been studied intensely for more than 50 years. Using fluorescence microscopy, today’s scientists can see the tug-of-war cells undergo as they move through mitosis. Thread-like proteins, called microtubules, extend from one of two spindle poles on either side of the cell and attempt to latch onto the duplicated chromosomes. This entire "spindle" structure acts to physically distribute the chromosomes, but it is not free floating in the cell. In addition to microtubules from both spindle poles that attach to all of the chromosomes, astral microtubules that are connected to the cell cortex—a protein layer lining the cell membrane—act to pull the spindle poles back and forth within the cell until the spindle and chromosomes align down the center axis of the cell. Then the microtubules tear the duplicated chromosomes in half, so that ultimately one copy of each chromosome ends up in each of the new daughter cells.