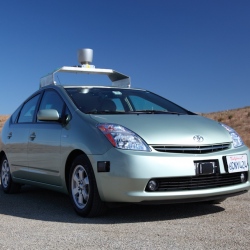 While robotic cars have a ways to go yet before rolling (themselves) out onto showroom floors, BMW is incorporating driver assistance features into its cars that drivers can use – and they can sell – sooner rather than later. Their semi-autonomous driving system, ConnectedDrive Connect, was announced last year. The car maker has finished its closed track test runs and has released a video of the car out on the Autobahn for some good old fashioned hands off driving fun.

ConnectedDrive Connect includes four types of sensors – radar, camera, laser scanners and ultrasound distance sensors – that allow it to track cars in front of it up to a distance of 50 meters. It also detects cars in adjacent lanes. A driving simulator produces driving strategies on the go. For example, the car slows if it’s moving to fast into a turn, and it taps the brakes to maintain control going downhill. Like any cruise control the driver sets the speed and the maintains a safe distance behind a car in front of it. The system can be enabled between speeds of 30 and 180 km/h (81 mph). I’d be a little worried if that truck in the next lane splashes some mud on the car that it doesn’t go pell mell into the car in front of me. The sensors are “largely resistant to dirt build-up” according to BMW, but I’d wipe down regularly just to be safe. BMW owners probably don’t need to be reminded of that anyway.

But it’s really no fun to just simply maintain a safe distance, not with a Beamer. If the car in front of you is going too slow, ConnectedDrive Connect senses your impatience, changes lanes, and leaves the slowpoke in the dust.