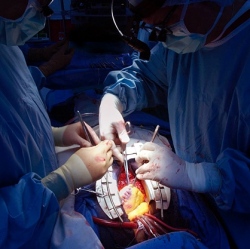 An organ is similar to a machine. Organs contain many interacting parts that must be positioned in a specific configuration to work properly. Getting all the right cell types in the appropriate locations is a real challenge. Recently, a team of scientists has met that challenge by using stem cells to grow an organoid that resembles a developing kidney.

Our kidneys filter our blood, allowing us to remove harmful toxins without eliminating important chemical building blocks and nutrition sources. Kidneys do this by passing our blood through features called nephrons, complex tubular structures that extend deep within the organ. These tubes create concentration gradients that drive for the exchange of molecules in and out of the blood.

The function of nephrons can be attributed to their complex architecture, containing relatively straight tubes (distal and proximal), a U-shaped bend (loop of Henle), and an interconnecting micro-tubular network (glomeruli). The challenge has been to figure out a way to start with a single population of stem cells and direct them to form all these structures.

Previously, scientists have used stem cells to grow the tubes that filter the blood (nephrons) and the tubes that send fluids to the bladder (collecting ducts). This is more challenging than it seems, as both these structures arise from the same embryonic tissue, yet they originate at distinct times and positions in a growing embryo.

In order to better understand what’s happening here, the team first performed an analysis of the mechanisms that enable a stem cell to preferentially transform into either a collecting duct or a nephron. They found that the amount of time cells are exposed to specific signaling molecules (such as retinoic acid, FGF9, and Wnts) influences the fate of the stem cells.

Using this information, the scientists were able to control the relative ability of the cells to transform into either the nephron or the collecting duct. They started with either human embryonic stem cells or human induced pluripotent stem cells and exposed them to a series of signaling molecules over the course of a week, then cultured the cells for up to 20 days. Over this time period, the cultures spontaneously formed complex kidney-like tissues called organoids.

Further examination of the kidney organoid revealed that they contain individual nephrons with distinct distal and proximal tubules, early loops of Henle, and other key structures. When the genes that are active in these kidney organoids were compared to those active in human fetal tissue, they showed the highest resemblance with a first trimester human kidney.

While these kidney organoids are not yet ready to transplant into adolescents or adults, they can serve as a powerful tool to screen drugs for kidney toxicity or model diseases. This in turn could help develop more effective therapeutics that could lower the risk of a patient landing on the kidney transplant list in the first place.