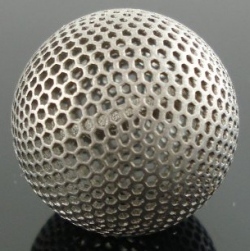 Typography used to be heavy industry. The companies that make typefaces are still called foundries because there was a time when letters were made of metal. When you got enough of them together to reliably set a whole book or whatever, you had a serious amount of hardware on your hands. Fonts were forged. Picking a new one was a large capital investment. Today, fonts are a thing that you pick from a drop-down menu and printers are things in your home that can render just about any typeface you can imagine.

We went from massive metal fonts and centralized presses to the current desktop regime by degrees. In the early days of desktop printing, we had the dot-matrix. The deal was simple: "We give you one crappy font and you need specialized paper but you can do this at home". It wasn’t useful for much, but it was useful for some things, and used frequently enough that it was worth developing improvements.

Today, it’s reasonable for most people to have a pile of paper and a printer that cost them next to nothing and for businesses to have stockrooms laden with the raw material of documents. Print shops have had to stay a step ahead, selling convenience, their ability to print nicer things on bigger formats, or the economics of scale.

I want you to bear this in mind, when you consider Chris Mims’ argument that the idea that 3-D printing will be a mature technology "on any reasonable time scale" is absurd.

Chris is right that 3-D printing as it stands isn’t a replacement for the contemporary industrial supply chain. It’s clearly a transitional technology. The materials suck. The resolution is terrible. The objects are fragile. You can’t recycle the stuff.