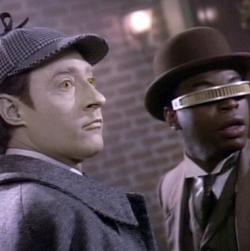 A Queen’s University researcher has created a Star Trek-like human-scale 3D videoconferencing pod that allows people in different locations to video conference as if they are standing in front of each other.

“Why Skype when you can talk to a life-size 3D holographic image of another person?” says professor Roel Vertegaal, director of the Human Media Lab.

The technology Dr. Vertegaal and researchers at the Queen’s Human Media Lab have developed is called “TeleHuman” and looks like something from the Star Trek holodeck.

Two people simply stand infront of their own life-size cylindrical pods and talk to a 3D hologram-like images of each other. Kinect cameras capture and track 3D video and convert into the life-size image.

Since the 3D video image is visible 360 degrees around the Pod, the person can walk around it to see the other person’s side or back.

While the technology may seem like it comes from a galaxy far, far away, it’s not as complicated as it sounds. Dr. Vertegaal and his team used mostly existing hardware including a 3D projector, a 1.8 metre-tall translucent acrylic cylinder and a convex mirror.

The researchers used the same Pod to create another application called BodiPod, which presents an interactive 3D anatomy model of the human body. The model can be explored 360 degrees around the model through gestures and speech interactions.

When people approach the BodiPod, they can wave in thin air to peel off layers of tissue. In X-ray mode, as users get closer to the pod they can see deeper into the anatomy, revealing the model’s muscles, organs and bone structure. Voice commands such as “show brain” or “show heart” will automatically zoom into a 3D model of a brain or heart.