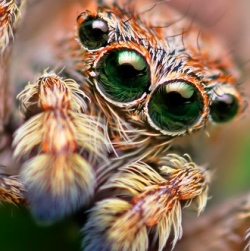 Getting up close and personal with a furry tarantula is probably the very last thing someone with a spider phobia would opt for, but the encounter may be the ticket to busting the brain’s resistance to arachnids.

A tried-and-true exposure therapy, this one lasting just hours, changed activity in the brain’s fear regions just minutes after the session was complete, researchers found.

"Before treatment, some of these participants wouldn’t walk on grass for fear of spiders or would stay out of their home or dorm room for days if they thought a spider was present," said lead study author Katherina Hauner, postdoctoral fellow in neurology at Northwestern University Feinberg School of Medicine, in a statement.

After a single therapy session lasting up to three hours, "they were able to walk right up and touch or hold a tarantula. And they could still touch it after six months," Hauner said.

Spider phobia is a type of anxiety disorder called specific phobia, which also includes phobias of blood, needles, snakes, enclosed places and others. About 9.4 percent of the U.S. population has experienced a specific phobia at some point in their lifetime, Hauner said.

Hauner told LiveScience she hopes people who have specific phobias, particularly of spiders, will realize that successful treatments are out there, and that their phobias can take just hours to cure (though some cases can take a couple weeks to cure, she noted). "It’s still not easy. It involves being motivated to overcome your fear."

Spider madness
Hauner and her colleagues examined 12 adults, nine women and three men with an average age of 22, who met diagnostic criteria for having a spider phobia; their arachnid fear was so great that, before therapy, they had trouble even looking at photos of spiders. And when they did get a glimpse, each phobic’s brain showed increased activity in regions linked to fear response, including the amygdala, insula and cingulated cortex, in functional magnetic resonance imaging (fMRI) scans.

When asked to touch a tarantula in a closed terrarium, participants were also too afraid to go no closer than an average of 10 feet away. [In Photos: Tarantulas Strut Their Stuff]

In therapy, the participants learned about tarantulas in general and that their oversized fears of the creepy crawlies were just that. They were also guided through a multistep process that inched them closer to the enclosed tarantula until they could actually pick up and hold the spider. (At one point they touched the tarantula with a paintbrush, next while wearing a glove and eventually they pet it with their bare hands or held it.)

"I would teach them the tarantula is fragile and more interested in trying to hide herself," Hauner said.