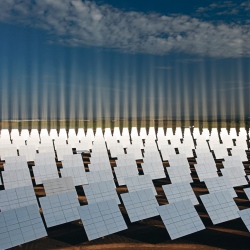 Maricopa County, Arizona is set to play host to a 125 MW photovoltaic solar power plant, according to an announcement on Tuesday from Fluor Corporation. The company has won the separate contracts to build and maintain the facility, which upon completion will fleetingly join the ranks of the the world’s largest photovoltaic solar farms. The project, known as Arlington Valley Solar Energy II (AVSE II) will be built on 1.8 square miles (4.7 sq. km) near to the Arlington Valley Combined Cycle Facility, a 577 MW natural gas plant also designed and built by Fluor.

"The State of California will benefit from the green energy delivered from the project as well as the solar panel sales from a San Diego-based manufacturer for a portion of the project," said John King, executive vice president of LS Power, who awarded the contract.

However, AVSE II will not be the world’s largest photovoltaic installation. That honor remains with China’s 200 MW Huanghe Hydropower Golmud Solar Park. If you broaden your criteria to encompass all forms of solar power, then the 354 MW Solar Energy Generating System in California’s Mojave Desert takes the gong.

However, all of the above will be dwarfed come 2019, when China’s 2 GW, 25 sq. mile (65 sq. km) photovoltaic plant, the Ordos Solar Project, is due for completion. India has four 1 GW photovoltaic projects at the planning stage, while the U.S. has ten or so photovoltaic plants (between 200 and 500 MW in size) under either planning or construction that are due to be completed at various intervals within the next five years. It won’t be too long before 150 MW PV plants begin to sound small.

Though widely regarded as a general engineering corporation, this is not Fluor’s first foray into renewable energy. Fluor designed and built the 500 MW Greater Gabbard offshore wind farm in UK waters, and proposed a 5 GW multi-tech solar plant in South Africa.