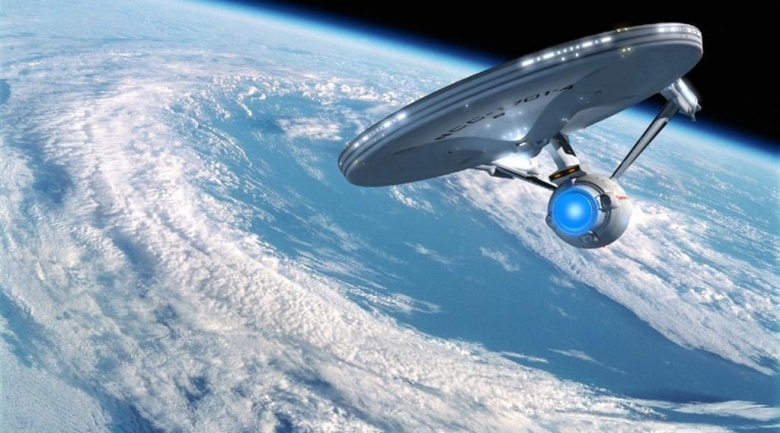 In fact, many of the technologies we currently possess originally started as concepts in scifi. From such common things that we take for granted  like cellphones  to more complex technologies such as computer viruses and geostationary satellites, sci-fi still continues to provide us a map for future tech.

Here is a list of 10 current technologies that were originally inspired by science fiction.

The first concept of a mobile communication device occurred on a little television series called Star Trek. In fact, Martin Cooper (pictured), the inventor of the mobile phone, has stated that his inspiration came from watching Captain Kirk speak into his handheld communicator on the series. In 1973, Cooper made history when he placed the first public telephone call on a portable cellular device. Who did he call? His competitors at AT&T’s Bell Labs, phoning them from the streets of New York City. Mobile phones have come a long way since then (the original weighed in at 30 ounces!)  and I believe we all owe Cooper a debt of gratitude for being a Trek fan.

In the year of 1870, Jules Verne published the science fiction classic Twenty Thousand Leagues Under the Sea, which revolved around the adventures of an inventor who traveled around in Nautilus, a submarine more advanced than anything that existed at the time. Although submarines had existed before the novel was released (most development proving to be inconclusive and haphazard) , it wasn’t until Verne’s story became popular that submarine design was improved upon.

In 1878, the Reverend George Garrett obtained a patent for "Improvements in and appertaining to Submarine or Subaqueous Boats" and set up his own company to have them built. His first prototype was human and steam-powered, the first of its kind. Eventually other inventors followed suit. Today, most submarines are electric, just like the Nautilus.

In 1945, author Arthur C. Clarke published an article in Wireless World magazine that proposed a satellite that would remain motionless in the air, rather than passing by overhead. Such a fixed position for a satellite could be useful for relaying television and radio signals, as well as to help ships navigate, among other things. Clarke surmised that in order to do this, a satellite could be put into orbit both in the same direction as the planet rotates and at the same speed. The article was not considered serious at the time, but became a reality nearly 20 years later with the launch of  the first commercial geostationary communication satellite. The geostationary orbit is now sometimes referred to as the Clarke Orbit or the Clarke belt.

American scientist Robert H. Goddard, who built the first liquid-fueled rocket, became fascinated with spaceflight after reading a serialization of H.G. Wells’ War of the Worlds. Goddard’s rocket was successfully launched on March 16, 1926. He was later quoted as saying that the concept of interplanetary flight "gripped my imagination tremendously." Goddard’s developments eventually made space flight a reality. Interestingly enough, at the time, he was often ridiculed in the press. Now he is considered a founder of modern rocket science.

Waldo was initially a short story published by Robert A. Heinlein in Astounding Magazine in 1942 under the pseudonym Anson McDonald. The story is about a mechanical genius, Waldo, and his journey from a self-imposed exile to a more normal existence. Waldo was born as a weakling, unable to lift up his head or use his hands to drink or eat. Waldo created a mechanical hand that he used with a glove and harness. Today, these mechanical arms, called Waldos, are used by the nuclear industry.

Long before anyone ever uttered the words, "Don’t tase me, bro," Edward Stratemeyer began publishing a series of books about a teen boy named Tom Swift who was inventive and scientifically-inclined. The first book was written in 1910 and was meant to teach young adults about science. This boy invented a number of things, but it was the electric rifle that Jack Cover, a NASA researcher, was inspired by. Cover began developing the actual Taser (an acronym for "Thomas A. Swift’s Electric Rifle") in 1969. The device was completed in 1974.

The online virtual world of Second Life was created in 1999 by Phillip Rosedale of Linden Labs. Rosedale cited Neal Stephenson’s "Metaverse" from the novel Snow Crash as inspiration for the virtual community. In the novel, the "Metaverse" was where humans, as avatars, interacted with each other and software agents in a three-dimensional space that mirrors the real world. As a sort of metaverse itself, Second Life is not just a casual social playground. It has also been used by emergency responder training, as well as being used as an educational tool.

Whether you own an iPad or a Kindle Fire or some sort of touchscreen flat device, you owe a debt of gratitude to the previously-mentioned Star Trek, this time Star Trek: The Next Generation. The PADD (Personal Access Display Device), as it was known on the TV series, allowed users to remotely access databases, enter logs and play back audiovisual content with the touch of a finger. When Apple’s Steve Jobs first announced the iPad, he used the new Star Trek movie to show off the device’s multimedia capability.

In a 1997 interview with Time magazine, Tim Berners-Lee (pictured), the man most often credited for the creation of the worldwide web, spoke of a fascination in his youth of a story by Arthur C. Clarke. This short story, Dial F For Frankenstein, which was written in 1964, featured a setting where computers were networked together and eventually began to learn to think autonomously. Although Berners-Lee was clear that he didn’t want to entirely fulfill this vision, he did see the web as something that could transform society. 15 years later would prove that he was right.

This is probably not something we want to celebrate as an invention that owes its existence thanks to science fiction, but it is inspired by sci-fi all the same. In 1975, a novel by British author John Brunner, The Shockwave Rider, described a self-replicating program that could spread across a network. In 1982, John F. Shoch and John A. Hupp, Xerox researchers, created the first computer worm, a small program that was designed to identify idle CPU cycles but ended up growing beyond their intentions. Fast forward to today, when many hackers still refer to The Shockwave Rider as an influential book.