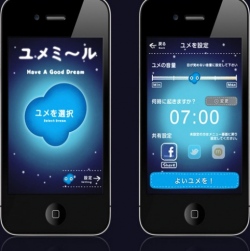 We all wish we could control what our dreams are at night, whether it’s to pretend we have powers like Superman or simply to enjoy a relaxing stroll through a mansion on the Moon that happens to have a talking lion for a butler, complete with monocle. Sadly, we’re still a long way away from programming our sleeping moments like a Netflix queue, but one Japanese app may have a quick solution. The Yumemiru app for iOS can detect when you enter dream sleep and then plays a soundtrack to influence what happens in your dreams.

It sounds like something from the movie Inception, but altering a person’s dreams can reportedly be fairly simple. The app uses a timer and the Apple device’s microphone to detect when a user has entered REM sleep, which is when they’re most susceptible to dreaming. Then it begins to play a soundtrack for the specific type of dream that the user selects, which could include sound effects or voices directing their dream. The available dreams include walking through a forest, visiting the beach, flying, becoming rich, and even romances specified for both men and women.