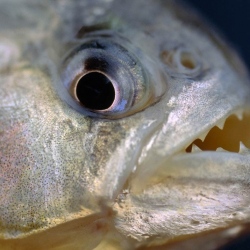 Along with the death of scores of marine animals and seabirds, one of the main concerns during the Deepwater Horizon oil spill was the impact on the food chain. A new study clarifies that impact: Hydrocarbons from the Macondo well trickled into the ocean food chain via its tiniest members, zooplankton.

Zooplankton are microscopic drifters that serve as food up and down the chain, from tiny fish to giant baleen whales. Zooplankton near and far from the oil spill contained the telltale signs of Deepwater Horizon oil, according to a new study from Eastern Carolina University and the University of Maryland Center for Environmental Science. The research team was able to identify the characteristic fingerprint of Macondo oil via its polycyclic aromatic hydrocarbons.

Deepwater Horizon oil was found in zooplankton up to a month after the Macondo well was finally capped, the study found. Just as other oil spill studies have found, the impacts were patchy — some zooplankton far away from the wellhead showed evidence of contamination, while other plankton close by showed lower levels of exposure.

In any event, traces of oil in these tiny creatures shows they came into contact with the spilled oil, scientists say. Given their importance as a food source for a wide range of animals, this indicates compounds in the oil did work their way into the food chain — and still are.