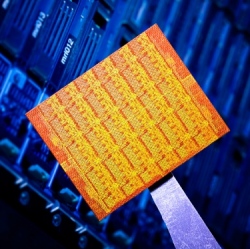 The next generation of powerful supercomputers will be used to design high-efficiency engines tailored to burn biofuels, reveal the causes of supernova explosions, track the atomic workings of catalysts in real time, and study how persistent radiation damage might affect the metal casing surrounding nuclear weapons.

The largest supercomputers today use about 10 megawatts (MW) of power, enough to power 10,000 homes. If the current trend of power use continues, an exascale supercomputer would require 200 MW, which would take a nuclear power reactor to run it. Solutions: energy-efficient graphical processing units (GPUs), which are very fast at certain types of calculations; and “many-core” chips, each containing potentially hundreds of CPU and GPU cores, allowing them to assign different calculations to specialized processors.

Modern processors compute with stunning accuracy, but they aren’t perfect. The average processor will produce one error per year, as a thermal fluctuation or a random electrical spike flips a bit of data from one value to another. No good solutions are in the works.

DOE is funding three “co-design” centers, multi-institution cooperatives led by researchers at Los Alamos, Argonne, and Sandia national laboratories. The centers bring together scientific users who write the software code and hardware makers to design complex software and computer architectures that work in the fastest and most energy-efficient manner.

DOE officials estimated that creating an exascale computer would cost $3 billion to $4 billion over 10 years. That amount would pay for one exascale computer for classified defense work, one for nonclassified work, and two 100-petaflops machines to work out some of the technology along the way. Funding has not yet been approved.